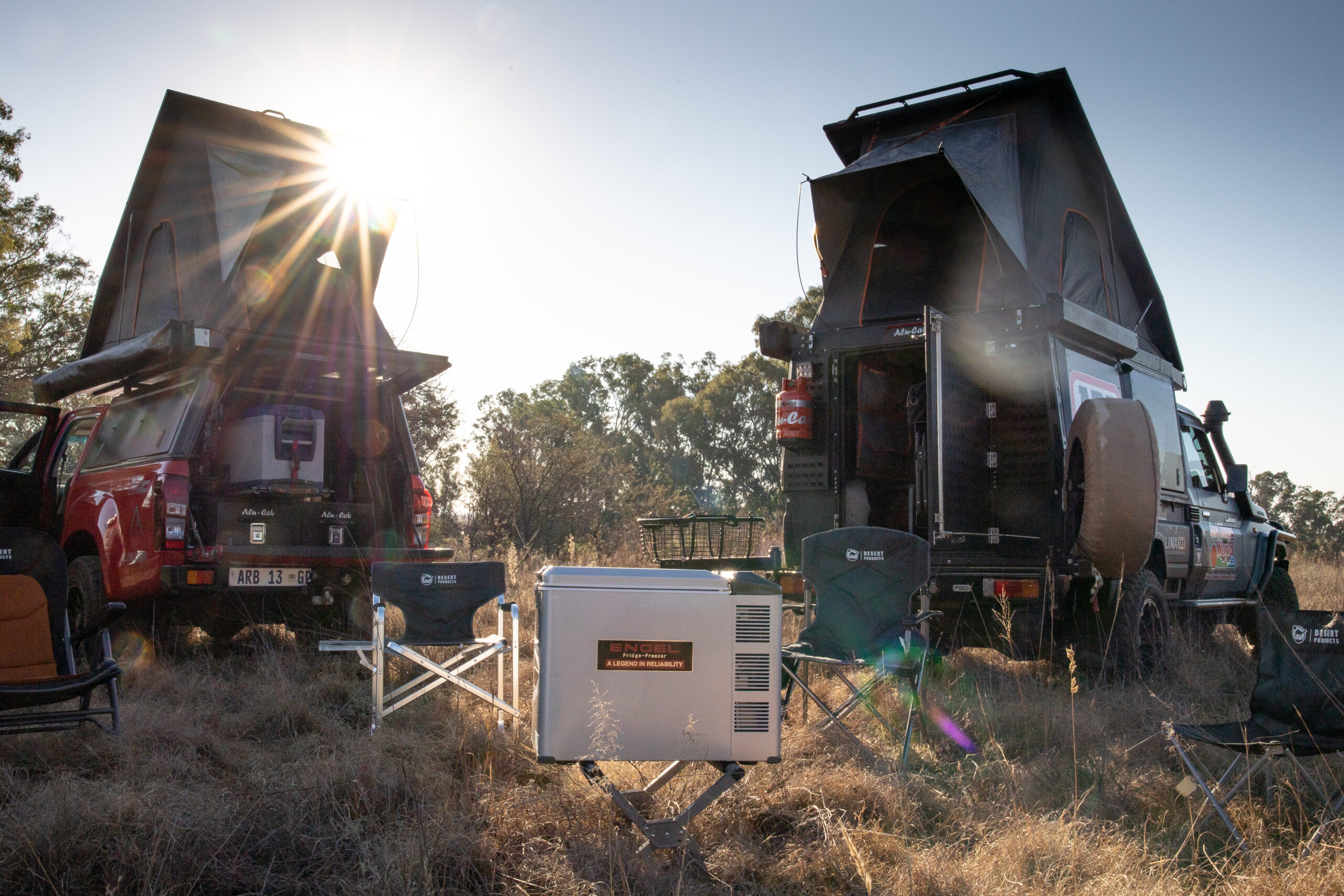 You don’t strictly need a fridge when travelling, but it makes a huge difference to camping pleasure to have cold drinks and unspoilt food out in the bush. Don’t waste money on a cheapie thermo-electric cooler or supermarket compressor fridge, rather buy the best and learn how to keep it working less hard. Angus Boswell gives some advice.

The best 12V compressor fridges on the market are excellent at retaining cold because they have good components, efficient design and thicker insulation. The less often the compressor and fans have to run to maintain a set temperature, the lower the power draw from the battery.

A lesson learned is to invest in a quality fridge that is made using the best materials, has a warranty, and that has a proven record for going the distance. Out in the bush, you don’t want to discover the circuit board is faulty, or the compressor can’t handle the shakes. A fridge can run from a 12V outlet drawing on the cranking battery, but the vehicle will shut off the fridge draw as soon as the battery voltage drops below a safe voltage – usually long before your frosties are properly cold. It’s better to install a dual battery setup using a smart DC-to-DC charger, with a deep-cycle auxiliary battery kept as fully charged as possible via both the car’s alternator and an alternative source such as solar panels.

Fridges are power hungry, especially when outside temperatures are hot and the fridge has to cycle often. This draw can range from 1 to 6 Amps per hour. The average draw is around 2.5 Amps. Assume the fridge runs for half of each day, that gives a daily draw of around 30 Amp hours (2.5 x 12). Now take the average 105Ah deepcycle battery. It should never be discharged by more than 50% if it is a lead-acid type, or it will be destroyed within three to four very deep discharges.

That means you only have 50Ah of power available, and probably less as most batteries are only charged up to around 80% of capacity by the alternator in the typical daily drive. Unless you are putting power back in, that means you can only run your fridge safely for one to oneand- a-half days.

Most fridges are meant to stop drawing power when input voltage is 12.1V, though some go as low as 11.8V, when the battery is way below a safe depth of discharge. If you are using a lithium battery, you can draw power for longer, and it will keep providing a stable high voltage until is nearly 80% depleted. The downside is the price of these batteries.

For most overlanders, especially those going off-grid for longer and losing the option of running the fridge on 220V and fully recharging the battery, the trick is to keep the fridge drawing as little power as possible. So, what strategies can you adopt to ensure the fridge runs less often, but the beer and meat stays chilled?

Before leaving home, plug the fridge into a 220V power source so it is already cold. Use the home fridge to freeze your meat, chill the drinks, and perhaps even freeze a few plastic bottles of water which will stay cold for a long time. This is a good cold start for the fridge – it won’t have to work hard when you are driving. You can also set the fridge temperature lower when the alternator is doing the work, and re-set it to a higher temperature when stopped.

If you intend to carry a lot of liquids, or want to have a steady flow of ice, it is worth investing in one of the new rotomoulded plastic ice chests. This is the ideal back-up cooler, as they are robust, there is nothing electrical to go wrong and the thick insulation keeps things cold for days if properly managed. While cooking, it can also act as a temporary cooler, so you don’t keep opening the compressor fridge.

Be sure to invest in a good insulated cover for the fridge to protect the outside and keep warm air out. You can add an evaporative cooling effect by draping wet towels over the fridge, making sure to keep them wet. You might consider adding a thick layer of EVA foam under the fridge, if heat will be getting in via the base.

The cooling fan on the side of the fridge puts out a lot of hot air, which you want to get rid of, or the ambient temperature where the fridge is sitting will rise quickly. When packing around the fridge, make sure the ribbed section where the fan sits is never blocked – give it plenty of breathing space. Second, ensure there is airflow through the vehicle. In the case of an SUV, keep the doors and windows open so there is a path for the hot air to escape. In a bakkie, open up one gullwing and the rear door of the canopy, or open the ventilation flap if so equipped.

Its sounds obvious, but try to keep the vehicle parked in the shade of a tree, or facing in such a way that the fridge is less often in direct sunlight. You might have to move the vehicle out of the sun’s path during the day. If you have shade net or reflective awning material, it helps to throw this over the vehicle to keep the interior cooler if the sun is unavoidable.

Some overlanders keep two fridges: one works as a freezer set to minus 16°C or so, keeping meat cold without any issues, while the other is the fridge, set at anywhere from zero to 4°C.

This takes up a lot of space and lots of battery power, so many have invested in a single dual-zone fridge/freezer, with one compartment sealed off inside and equipped with more evaporative tubes to form the freezer, with the other compartment running higher temperatures. A dual-door solution is better, so the freezer side is only opened when necessary, as it will be drawing more power by definition.

If you have a single temperature fridge, you can set the temperature low to keep things frozen, but add you own divider. Because colder air sinks, the lower part of the fridge is colder, and you can separate this section of frozen stuff using a shelf (made of wood, thick plastic, etc), from the things that should not be so cold placed on top – like cheese, vegetables and lettuce.

Try to avoid adding warm things to the fridge, as it takes a long time to cool them down. As nights are usually colder, place the warm beers for the next day on the roof of the car overnight to chill them before placing them in the fridge. Add warm foodstuffs as early as possible in the morning, as the auxiliary battery will be charged up when driving or by solar inputs during the day.

A full fridge is more efficient than an almost empty one. It sounds counter-intuitive, but if it contains lots of cold items, rather than lots of warm air, it will cycle less often. Fill up the extra space with bottles of cold water, and save some battery power.

It’s very hard to instil ironclad discipline around the fridge, and the younger ones like to open the fridge many times an hour while rooting around inside for what they want. All the cold air escapes and the motor has to cycle almost continually to get back up to the temperature set point. One strategy is to put the drinks for the night into that back-up cooler box. Another is to open the fridge just once to get out all the things that will be needed for dinner, or lunch, for example, and to then keep the lid firmly closed until the next meal preparations.

Finally, it’s worth keeping the interior organised: know where the different foodstuffs are, and keep them in their allotted place. It seems a bit OCD, but it will ensure that you know where things are, and less cold air escapes while you are getting what is needed.

Engel fridges – distributed locally by 4×4 Mega World – has exclusive use of the unique Sawafuji Swing Motor, elevating it to a league of its own. Japanese technology at its best, the Sawafuji Swing Motor has only one moving part. Unlike many rotary type compressors, the motor does not need to perform a full stroke on start up which means that it does not have a high start-up current draw. It operates at 30-degree angles and on rough corrugated tracks without any loss of efficiency, making it the most effective choice of motor for Engel fridges.

The piston is connected to an electro-dynamic device which is powered using magnetic fields. With this technology there is no need for bearings, cranks or con-rods, and less moving parts means less chance of failure. With only one moving part, frictional losses are very low, resulting in a highly efficient compressor. Since 1962 well over three million Engel Fridge Freezers have been manufactured and sold all over the world and the 4×4 Mega World team has repeatedly tested the range in real-life camping applications in the harshest of African conditions.

For more info on the Engel Range: https://www.4x4megaworldonline.com/engel-fridge-freezers/