The call of the wild, Tanzania Pt 2 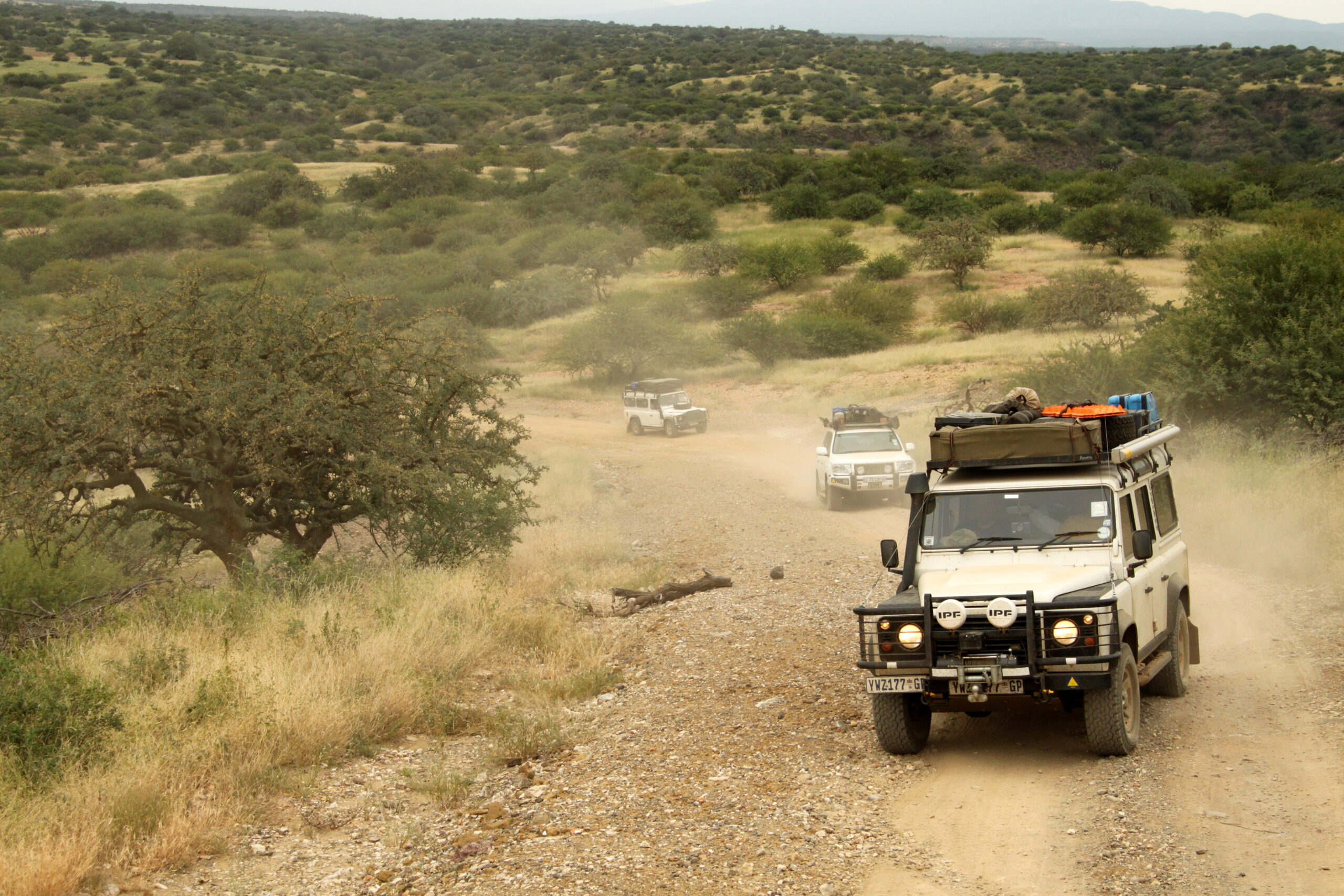 In part one’s tale with Simon and Desiree Steadman of Ultimate Adventures ended with the group hitting the hay at Utengule Coffee Lodge in Tanzania, dreaming of what was to come on this Ultimate Tanzania Expedition. This month we continue to Ruaha National Park and the Selous Game Reserve.

Britain’s foremost writer on African wildlife safaris, Brian Jackman, once said: “Africa changes you forever, like nowhere on earth – once you have been, you will never be the same.” This rings especially true for Tanzania – and while I have been here many times before, I leave changed every single time.

As we awoke at Utengule Coffee Lodge and looked out over the Great Rift Valley, one could smell the excitement in the air and feel the buzz amongst the group for what lay ahead of us. The previous day’s border shenanigans were already low on the conversation list as we sat around the breakfast table, enjoying a delicious full English breakfast washed down with numerous cups of Utengule’s awardwinning coffee. After a short briefing on what to expect for the day’s drive ahead, everyone scurried off to their rooms to grab their bags and get ready to hit the road.

Driving in Tanzania is a different beast altogether and something that catches out a lot of overlanders when they prepare for their trips through here. The average speed in any part of the country is generally 50km/h since the speed limit jumps from 120km/h down to 80 then down to 60 and then 30km/h as you travel through each little village and town. For this reason, it is always a good idea to plan your route with no more than 400km of driving each day, as this will normally take you around eight hours to complete. There are also very enthusiastic police officers armed with radar guns and credit card machines at the beginning and end of most towns, so you really need to keep your eye on your speedometer and make sure you know the speed limit at any given time in order to stay on the right side of the law and keep your credit card safely in your wallet.

From Utengule Coffee Lodge, our convoy winded its way down the escarpment towards our overnight stop at the Kisolanza Old Farmhouse campsite, situated about 50km south of Iringa. The traffic going through Mbeya is something that makes Lusaka look like a quiet country lane as motorbikes whizz in and out of nowhere and traffic lights are more of a guideline than a rule. At this point I always tell our group to just enjoy the organised chaos, look around and soak up what is going on at every street corner with the vibrant shop colours and buzz of people.

Luckily this chaos does not last long and soon we were enjoying a stress-free drive to our campsite. Kisolanza Old Farmhouse campsite is a perfect stop-over venue with plenty of shade in the campsite and very good, clean ablutions. It is also perfectly situated for access to Ruaha National Park (about 130km west of Iringa).

At 20 226km², Ruaha National Park is one of the continent‘s largest parks. The Great Ruaha River – giving the park its name – runs along its south-eastern boundary and as the dry season shrinks the river, it draws in more wildlife, making for some spectacular game viewing. Massive gatherings of elephant, giraffe, buffalo, kudu and impala are often found around the riverbeds, while the Mdonya woodlands are a great area to see the elusive sable, roan and hartebeest.

The largest collection of elephants in Tanzania is found here in Ruaha, along with very healthy populations of lions, leopards, cheetahs, wild dogs and spotted hyena. In fact, Ruaha holds around a tenth of the world’s lion population. It is the second largest lion population in the world after Selous Game Reserve and is one of only six lion populations left in the world that still has over 1 000 lions. For bird lovers this is paradise, with over 570 different species found in the park.

During our three nights in Ruaha National Park, we were treated to some great predator sightings and lions were popping up all over the place. Nothing beats lying in your tent and falling asleep to the sound of lions calling in the night. This seemed to be the theme song for Ruaha nights as the lions called for us every night, without fail. On one particular evening, the sound of the lions was drowned out by the eery sound of two male hippos battling it out a mere 100 metres from our campsite. The groaning and wailing went on for hours and had everyone in the group nervously shining their lights in that direction every now and then to make sure they weren’t getting any closer.

While nerve-wracking at times, this is what makes wild camping in unfenced campsites so special. You really feel one with nature and you’re treated to some unbelievable experiences. Ruaha is just one of those special places that you could never get tired of visiting as you will experience something different every single time. Whether it’s the beautiful baobabs scattered across the landscape in the early morning light or fish eagles fighting with a saddle-billed stork over a fish, Ruaha National Park never disappoints and is a destination that every nature-loving overlander should have on the top of their bucket list.

When our convoy rolled out of the park on our last morning, you could feel the sombre mood flowing through everyone as we were all very disappointed to be leaving such a magical place. Luckily, there was still so much more to look forward to as our next port of call would be the world-renowned Selous Game Reserve.

The drive from Ruaha to Selous is around 630km with a mixture of good tar, bad tar, corrugations, and good gravel. The drive through the Valley of Baobabs is mind-blowing and you struggle to keep your eyes fixed on the road with so many baobabs to look at. It is way too far to tackle in one go, so we break up the journey by staying over in a neat little lodge just outside the Mikumi National Park, called Tan-Swiss Lodge. At this point in the trip, some of our guests opted to upgrade and stay in one of their quaint, air-conditioned bungalows to take a break from the camping for a night. Tan Swiss Lodge is situated slap-bang in the middle between Ruaha and Selous so it’s the perfect place to stop over on your journey between the two parks.

The next day we hit the road at 08:00 as the drive to Selous is a tricky one, even though it is only 320km from Tan Swiss to Lake Tagalala campsite inside the park. Once you turn off the tar road at Morogoro, you are faced with some slow going on corrugated gravel roads and some winding mountain passes which are only wide enough for one vehicle, making it interesting when you encounter oncoming trucks.

The Selous Game Reserve is one of Africa’s oldest protected areas and the continent’s largest game reserve at 54 600km², just slightly bigger than Botswana’s Central Kalahari Game Reserve and three times the size of our Kruger National Park. It was proclaimed as a protected area in 1896 and established as a game reserve in 1922, named after Sir Frederick Courtney Selous, a famous big game hunter, British officer, conservationist and explorer. In 1982 it was declared a Unesco World Heritage Site due to its rich diversity of wildlife and uninterrupted nature. It is this resume that makes Selous a must-visit destination for most avid overlanders. I must warn you though, this impressive CV comes at quite a cost, with park fees of over R3 000 per night for two people per vehicle. In fact, Tanzania’s parks in general are by far the most expensive of all the Parks we visit in a year – but, as everyone who has been privileged enough to visit will attest to, it’s worth every cent!

north of the lake. It is perfectly located in the centre of the park, making it a great place from where to explore the game drive circuit. There is always something going on around Lake Tagalala and the birders are always blown away by sightings of some rare species such as African Skimmers and Palm Nut Vultures. Selous is also home to Africa’s largest lion population at an estimated 4 000 lions. Other impressive populations include 145 000 buffalo, 100 000 wildebeest, 35 000 zebras, 40 000 hippos and 250 000 impala. Selous used to be home to a large elephant population of around 110 000 animals, but excessive poaching has seen these numbers decline rapidly to an estimated population of around 15 000.

This magnificent game reserve is a modern-day garden of Eden, and you literally don’t know where to look next with the diverse landscapes of riverines, forests and vast savannahs. The birdlife in Selous is second to none and it is home to over 445 different species. It always feels like three nights here is not enough but in order to keep the tour as affordable as possible, we need to limit the damage to the wallet that those exorbitant park fees can inflict. Still, just like with Ruaha, we all left the park with a heavy heart. Fortunately, the main event lay ahead – the Great Migration in the Serengeti National Park, probably Africa’s most iconic reserve and my favourite park in the whole of Africa. Ruaha and Selous, you were amazing but it’s time to step aside and let the magical Serengeti do what it does best: deliver spectacular, life-long memories like no other place on earth can provide. We can only concur with Brian Jackman – you will leave forever changed.

Ultimate Adventures is run by Simon and Desiree Steadman. They offer top quality self-drive adventure tours throughout the continent and beyond, always going the extra mile with topnotch catering, courtesy of a chef on each trip. Their trips are immensely popular and the 2023 calendar is filled with amazing bucket list adventures: https://www.facebook.com/UltimateAdventuresTV/

For 2022 there are still a few spots left on the following adventures: