Good things in small packages: The Jimny in its element. 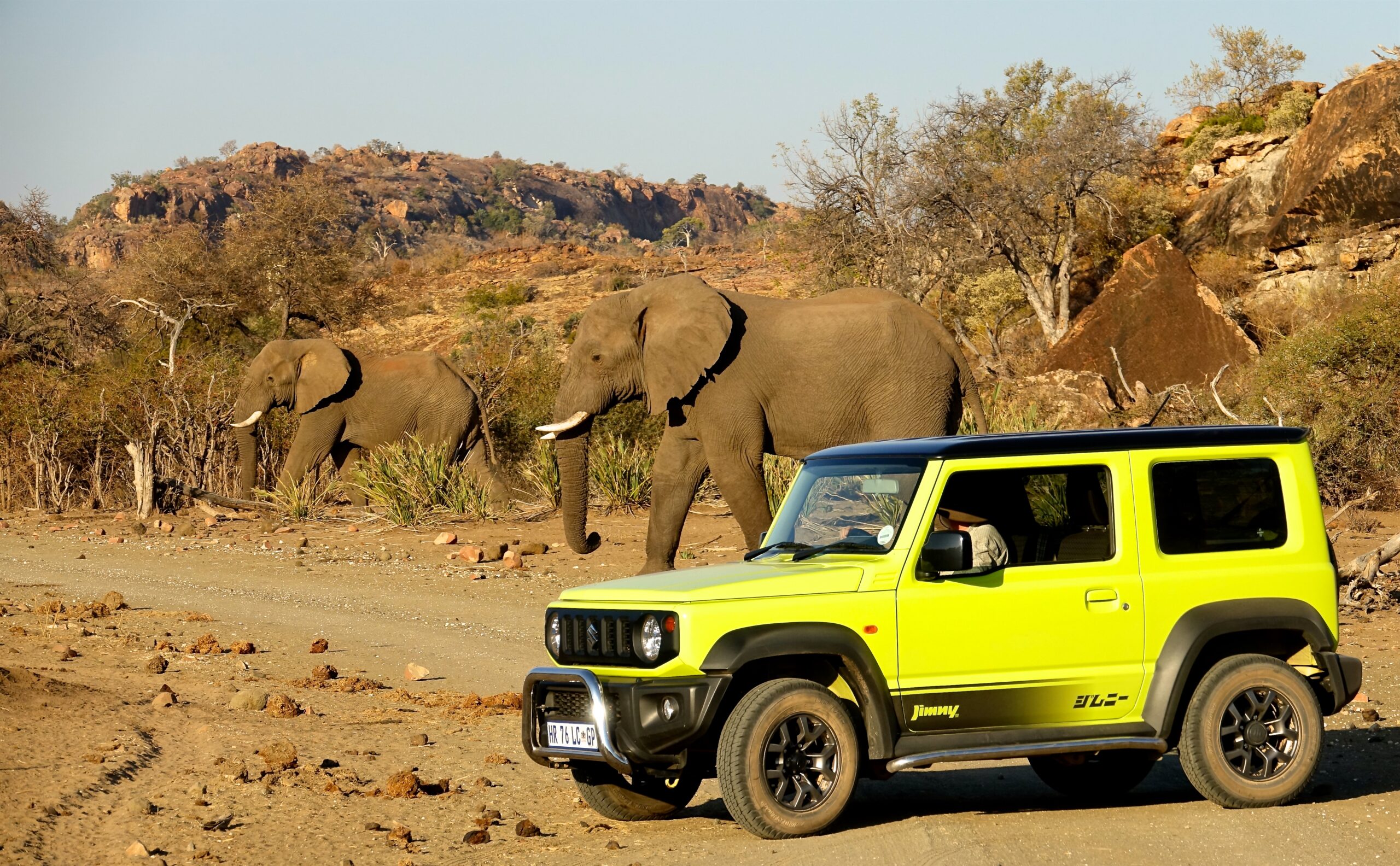 Well-known 4×4 guru and adventurer, Johan Kriek, sees the Suzuki Jimny as the best 4×4 buddy one could ask for – it’s always ready for some fun, it won’t let you down when the going gets tough off-road and it’s the perfect companion for tedious daily activities such as driving to and from work. He took it out to play in Limpopo recently.

Maybe it was the bright body colour, or perhaps its cheeky stance, but when I first laid eyes on this little giant, I couldn’t wait to get behind the wheel. Always up for an adventure, the Jimny simply begs to be played with, and I can understand why people are prepared to go onto a long waiting list to get one. Suzuki certainly hit the jackpot here! Each time I walked by the Jimny where it stood in the garage, it reminded me of that beloved Beetle of days gone by, cheekily winking at me. It was almost as if it was daring me to get out of the city for a little action. And I could feel myself being seduced into escaping to the great outdoors. As luck would have it, I was scheduled for a visit to the Limpopo valley, so we set off for Mapungubwe – to learn more about the golden rhino.

The Jimny’s new 1500 cc engine certainly isn’t shy, even here on the Highveld. I put the car in fifth gear, set the cruise control to 120km/h and relaxed. The Suzuki had no problem maintaining the speed. At Bela-Bela I decided to get onto the “old” route – the R101 – and headed further north through the beautiful bushveld. Now and then I had to gear down to fourth to overtake and the Jimny really impressed me with its acceleration. And contrary to what many say, the Suzi (our nickname for her) was by no means nervous on the “old” road surface. Rather, I found it very stable for a vehicle with such a short wheelbase.

There was surprisingly little road noise if one considers that there’s no luxurious trim or thick carpeting to absorb the noise. Average fuel consumption was between 7.2 – 7.5 litres/100km, which I found quite acceptable for a vehicle with ground clearance of 210mm. And seeing that the Suzuki is such a willing travel companion, I decided – just for fun – to veer off onto a gravel road outside Polokwane. The Suzi was bouncing about quite a lot, but I remembered that it has four-wheel drive and, without stopping, I pulled the short gear lever back. That did the trick and we continued merrily on our way, cruising through rural Limpopo and several game farms until we hit the tar road past Vivo. Back in two-wheel drive, we had to dodge quite a few large potholes caused by trucks.

Thankfully the nimble Jimny has decent tyres, which I didn’t have to worry about damaging when I had to swerve onto the gravel by the side of the road to avoid hitting them. Of course the Suzi also has anti-lock brakes (ABS) and electronic brake-force distribution (EBD) to provide additional peace of mind. After a day or so of travelling – because I just HAD to take the scenic route – we arrived in the Limpopo valley. It’s only once you park the Jimny next to a giant Baobab (Adansonia digitata) that you realise how small the vehicle actually is. And, naturally, the little plaything looks right at home there next to the huge tree. And boy – did we play! In the late afternoon I drove into the riverbed with the tyres deflated to 1.4 bar. With 4WD selected, I effortlessly drove through the thick sand in high range. Even driving up the bank later on was an uneventful affair, although I must admit I’d been hoping for a bit of action. Suzi and I took a double-spoor path running along the Limpopo and I had to engage low range to be able to cruise along at a low speed without constantly having to change gears. Both vehicle and driver were in their element!

The Limpopo valley in the Mapungubwe area is exceptionally picturesque. Giant Ana trees (Faidherbia albida) grow on the banks of the Limpopo river, with the dark green foliage of the big Nyala trees providing some contrast in between. The rough orange-brown sandstone koppies are dotted with Mopani trees – making for a spectacular landscape. In my opinion, the Mapungubwe National Park is one of the most beautiful parks in our country. It features an abundant variety of flora, and along with the elephants, giraffes, zebras, kudus and impalas, it will take your breath away. As we drove around exploring, I couldn’t help but think that this is what Suzuki’s slogan – Way of Life – is all about. All the while the Jimny purred contently as it slowly but surely changed my opinion of small 4x4s.

There are plenty of accommodation options in Mapungubwe and surrounding areas. These include everything from five-star lodges to self-catering chalets and campsites. As adventurers, we obviously chose to camp and later that evening, around the campfire and with Africa’s nighttime sounds as background music, our discussion turned to the Jimny. Finding fault with everything is a South African thing – there’s no such thing as perfect, right? I pointed out that the Jimny is rather tiny but my travel companions were quick with a counter-argument: “But that’s the Jimny’s entire reason for being. Small, affordable and capable!” And with only 1500 cc under the bonnet it can’t be much of a towing vehicle, can it?

Sure, you won’t be able to tow a massive offroad trailer, but a light Venter trailer shouldn’t be a problem. The fuel tank can take only 40 litres, but even at an average of 8 litres/100km the Jimny’s range is more than adequate for normal local – or even trans-border – travels. In fact, it can easily manage 450 to 500 kilometres on a tank. We started running out of arguments as the air got cooler. What about a roof rack? Again, no problem. The Jimny has gutters on either side of the roofline, perfect for mounting a roof rack. There truly was a counter-argument for every argument! After spending a few days with Suzi, the unanimous decision was that there really is very little to complain about. You know exactly what you want and what you will be getting when you buy a Jimny: an affordable and capable vehicle, with a good helping of fun on the side. Alas, our short vacation was coming to an end and Suzi and I had to return to Gauteng.

I stopped in Alldays to fill up and quickly calculated the fuel consumption – 7.2 litres/100 km. I got a real kick out of being able to fill up the tank for less than R400! I chose the quickest route home and exactly five hours later I pulled up in front of my house in Pretoria. How would I sum up my time with the Jimny? Is it the perfect vehicle for those seeking adventure? The answer is a resounding yes. The Jimny is an awesome, affordable vehicle that does well as a city dweller but also stands its ground as an African explorer

The story of Mapungubwe is one of the most enthralling historical tales from our part of the world. Situated in the North-Western part of South Africa where the Limpopo and Shashe rivers converge, the park borders on Botswana and Zimbabwe across the Tuli block. About a thousand years ago it was at the centre of a great and powerful community that did a lot of trading with the traders along the eastern coast of Africa. There are more than 200 associated archaeological sites in the area, with three “capitals” that existed at different times: Zhizo, K2 and Mapungubwe Hill. The capital at Mapungubwe Hill was the largest and wealthiest.

The king lived in blissful isolation at the top of the hill, while his subjects lived at the foot. Be sure to visit the interactive centre and museum close to the main entrance. You can even walk the 147 steps to the top of the hill to gain a king’s perspective of the area. After the collapse of the community about 700 years ago, the tribes that lingered in the area refused to go anywhere near the hill. They believed that it is holy ground, inhabited by their forefathers. Archaeologists haven’t been put off by the myths though and have discovered many impressive artefacts in the area. The best-known of these is the complete figurine of a rhino, made out of gold foil.