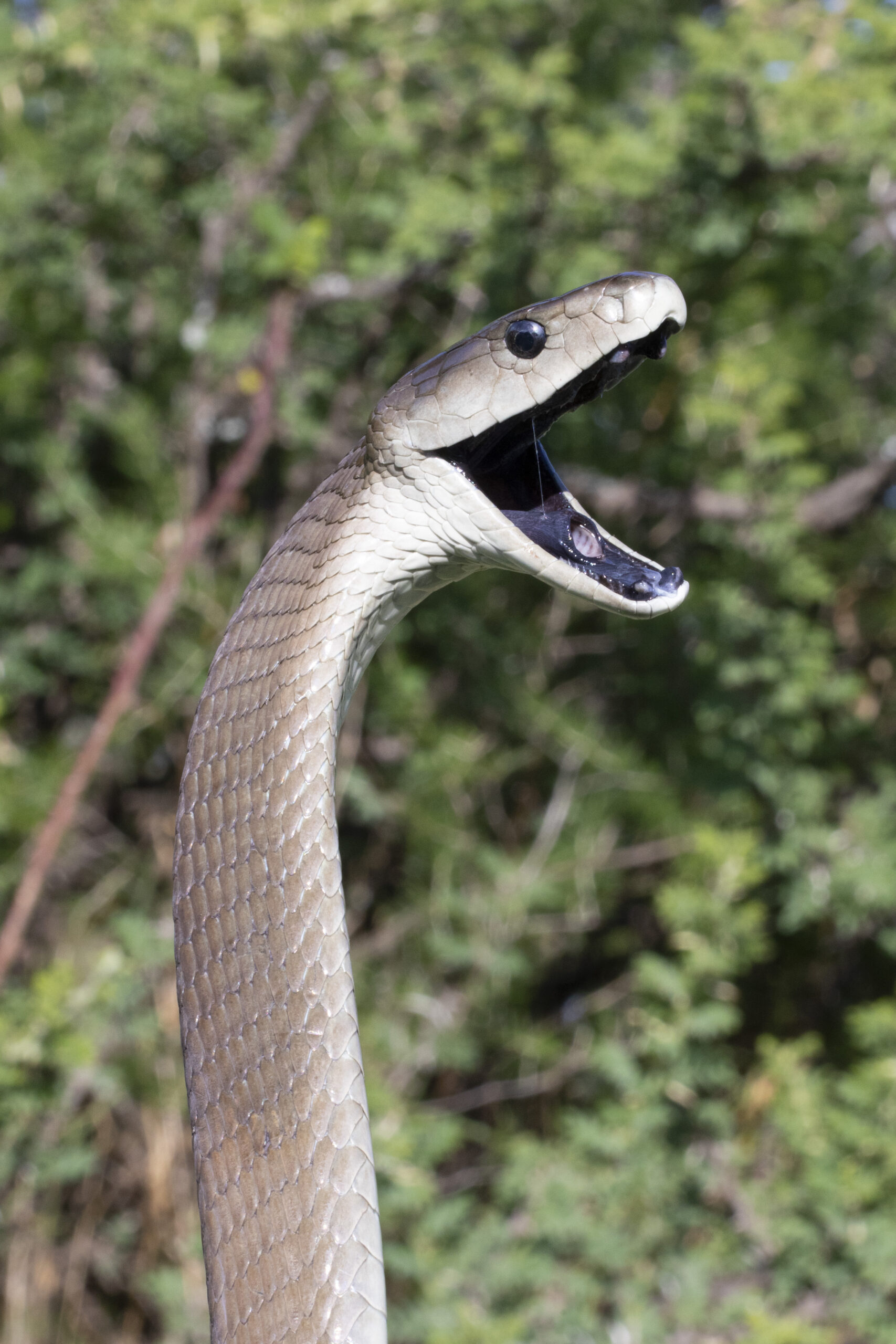 Most people have an innate fear of snakes, believing the only good snake is a dead snake. These ophidiophobes (people with a fear of snakes) are under the impression that no snake is beneficial and, as a result, instinctively fear every snake they see. In actuality, as explained by Johan Marais from the African Snakebite Institute (ASI), most snakes are docile, non-aggressive creatures that serve a vital role in nature. This month he talks to us about the much-feared Black Mamba.

The Black Mamba is undoubtedly the most dangerous snake in the world. It is also the longest venomous snake in Africa, reaching 3.8m. With its potent and fast-acting neurotoxic venom and with enough venom to kill up to 20 adults, it is feared with good reason. A full bite could result in an adult dying in less than thirty minutes.

While the above information is accurate, it doesn’t tell the whole story. While this snake may well have the ability to kill in a short period of time, such rapid deaths are the exception rather than the rule, and we now see more and more mamba victims surviving. Neurotoxins affect the nervous system, causing progressive weakness. The first symptoms are pins and needles in the lips followed by a metallic taste, difficulty in swallowing, nausea and vomiting, droopy eyelids, dilated pupils and difficulty with breathing. Death is because of a lack of oxygen to the brain. In most fatal bites, this takes one to eight hours if victims are not hospitalised.

Despite its name, mambas are not black in colour but mostly light or dark grey or an olive-brown. The name is derived from the colour of the inner mouth lining, which is black. When cornered or threatened, this snake is very quick to gape in a nervous fashion and may also form a long narrow hood. This graceful, alert snake inhabits termite mounds, deserted antbear or porcupine burrows, rock crevices and granite hillocks in both moist and dry savanna as well as lowland forest from the extreme northeastern Cape Province into KwaZulu-Natal, Mpumalanga, Swaziland, Northern Gauteng, Limpopo, North West, the northern parts of the Northern Cape and elsewhere further north.

Making a meal of it

It is a diurnal snake that actively hunts for rodents, squirrels, dassies, birds and other suitably sized mammals. Mambas often hunt from a permanent lair to which they return if not disturbed. It is a large snake and can comfortably move with up to a third of its body off the ground.

Sadly, this gracious snake has a reputation for aggression, supposedly chases people and is said to attack without provocation. This is far from the truth as the Black Mamba is a shy and nervous snake that avoids people if given the choice. The biggest danger is accidentally cornering this snake in a confined space – it may well strike more than once in rapid succession.

Having worked with hundreds of Black Mambas over the past 40 years, I can say with confidence that if you are more than 5m away from any mamba in any situation, you are perfectly safe and won’t get bitten. And as for their so-called aggression, more than one hundred Black Mambas are removed annually from residences in the greater Durban area, and bites are virtually unheard of.

Should someone get bitten by a Black Mamba, the victim must be taken to a hospital urgently as breathing may be compromised quite soon after a bite. Alternatively, meet a private ambulance service halfway – they are far better geared for such emergencies. Bear in mind that it is a lack of oxygen that is life-threatening, and mouth-to-mouth resuscitation could keep the victim alive on the way to the hospital.

About the African Snakebite Institute (ASI)

The African Snakebite Institute (ASI) is the leading training provider of Snake Awareness, First Aid for Snakebite and Venomous Snake Handling courses in Africa. These courses are presented by Johan Marais, one of Africa’s leading herpetologists with over 40 years of experience, in conjunction with Luke Kemp, a zoology graduate who has been working at ASI for the past four years. Besides their public and corporate training courses, ASI provides additional educational information, interesting reads and various tips in the form of newsletters, articles, posters and other documents on their website. They are also the largest distributors of snake handling equipment on the continent and have a free app that includes first aid information, snake identification features, snake removal information and more.

*For more information on upcoming courses and other information, download the app or visit www.africansnakebiteinstitute.com  or contact admin@asiorg.co.za

*Read more about the exciting trip our team took to Mapesu Private Game Reserve near Mapungubwe with Opposite Lock for a snake catching, relocation and handling experience with the African Snakebite Institute: