Towing off-road: the Do’s and Don’ts 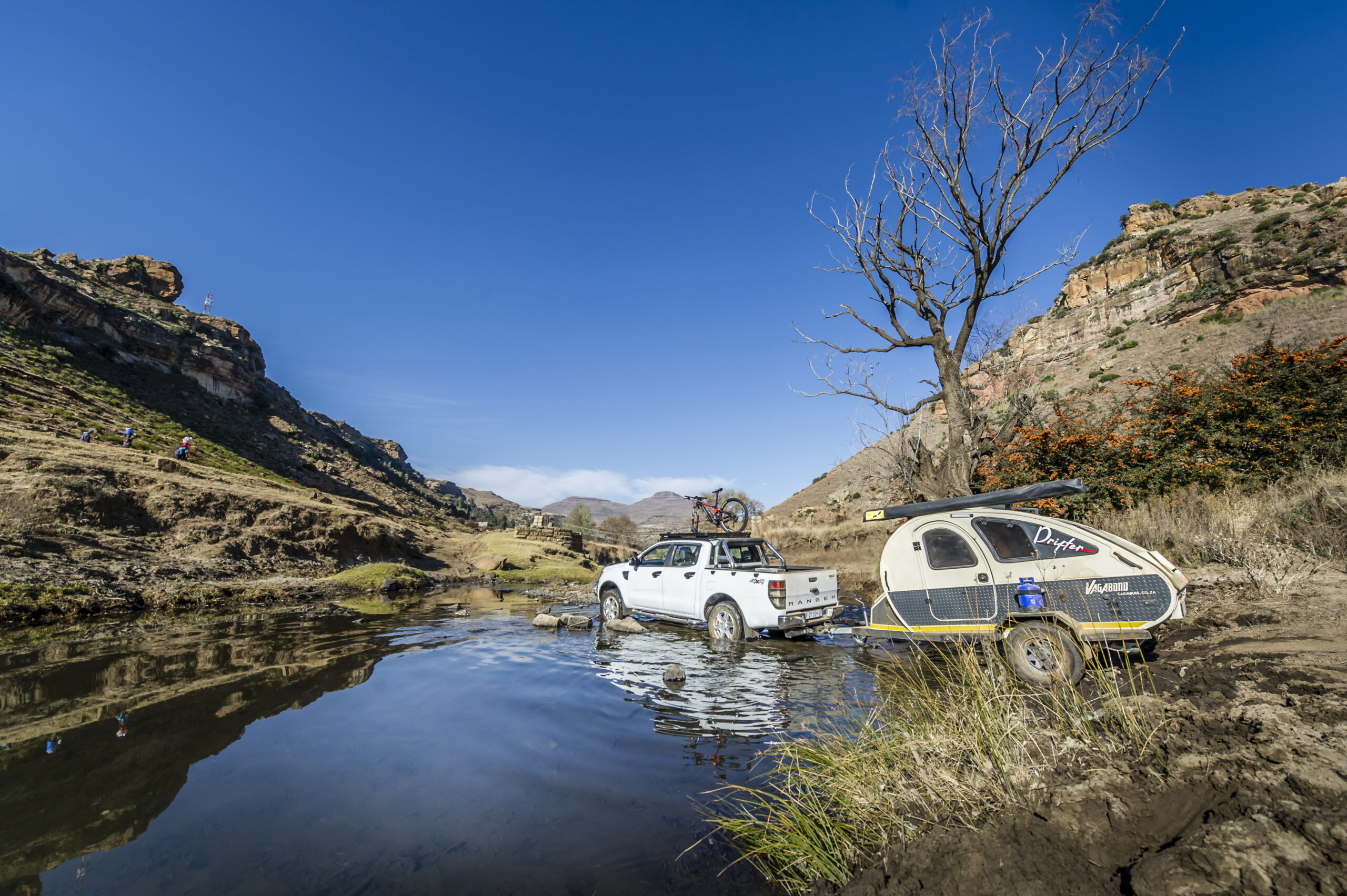 There is no better way to explore Africa than hooking your trailer or caravan behind your 4×4 and heading off into the unknown. Following our feature on general towing guidelines a while back, Mike Ilsley now takes a closer look at the critical elements relating to off-road towing specifically.

First off: always choose the lightest trailer or caravan available – take it from someone who has tried many options throughout my towing life! When going offroad, even the featherweights tend to feel like an anchor – so make sure your trailer fits your vehicle’s towing capabilities.

Trailer break over and departure angles

The vehicle’s break-over angle is normally constant while this aspect for a trailer/caravan is constantly changing as obstacles are negotiated.

This means that the trailer’s chassis can easily become snagged on obstacles that the tow vehicle may have cleared, with the biggest culprit usually being low-slung jacking points and jockey wheels. To prevent this, ensure that the jockey wheel can easily be removed and stowed away and that there are no other parts that protrude below the chassis.

Like the tow vehicle, the trailer also has a departure angle, which must be considered when off-roading. Descending over rocks, for example, may cause the rear of the trailer to snag, so be aware of taillight clusters and number plates, as they can be damaged or even be ripped off.

When going up Sani Pass on a recent trip, I unexpectedly encountered this as the very sharp bends encountered resulted in us having to reverse. With the limited space, it was almost inevitable that we would jack-knife the trailer/caravan and extra care had to be taken.

TIP: Drive slower when towing and make sure you leave enough room to manoeuvre.

We know about all the legal aspects of on-road towing and matching the mass of the tow vehicle and trailer, but what about off-road? Are there additional elements to consider? Since the trailer/caravan is essentially dead weight, the combination will only be capable of ascending milder slopes than a non-towing vehicle. Also, the slope’s surface plays a far more significant role with a caravan/trailer in tow. If the tow vehicle loses traction on a slope due to mud, the added mass of the trailer/caravan may result in the brakes not being able to halt the slide. Thus: when inspecting the obstacle, one should consider that should something go wrong, you may have to reverse back down the slope with the trailer attached.

What goes up must come down, and the trailer/caravan’s mass can be just as destructive when descending slopes. We once had an encounter with thick black mud on a public road in Swaziland. After letting one of the non-towing vehicles attempt the descent first, we concluded that the trailer/caravan would push the vehicles down the slope and slide to the side, making the combination uncontrollable. The rest of the convoy had to find an alternate route down the slope. This brings up the aspect of the centre of gravity. Off-road vehicles are typically designed with all of the heavy components slung under the passenger area. This means that they have a relatively low centre of gravity which translates into a low propensity to roll over. Some vehicles can even traverse a 45-degree slope successfully when loaded correctly.

However, trailers/caravans do not have heavy components such as gearboxes and engines. Some have water tanks and the like, but the tanks are often empty, so they can be ignored as ballast. Trailers often have roof racks and tents mounted on top, and you will be surprised how heavy a tent can be. Without the “low slung” heavy components, they have a relatively high centre of gravity and are thus inherently top-heavy.

So what does this all mean? Your trailer/caravan will roll over before the tow vehicle reaches the critical angle where a roll over would normally occur, but as they are connected, they will quite possibly force the tow vehicle to roll over as well.

TIP: You will need to learn how to reverse with a trailer/ caravan. If you cannot master this, refrain from buying one.

Like any expedition vehicles needing recovery points front and rear, a trailer/caravan going off-road should also be fitted with a strong tow points (front and rear), mounted solidly to the trailer chassis. When towing, it is always a good idea to pack in a few extra snatch straps and D-shackles. The trailer/caravan should also have jacking points to take the high lift jack for hoisting and recovery. It may sound obvious, but when recovering a thoroughly stuck vehicle and trailer/caravan combination, it usually is best to secure the trailer with suitable chocks and then detach it from the tow vehicle. The tow vehicle can then be recovered or driven out of the obstacle, whereafter the trailer/caravan can be recovered using a winch or tow straps.

TIP: When recovering a trailer in deep sand, one technique that can be used, is to lower the jockey wheel until it protrudes below the chassis, then slide a shovel under the wheel. This will give the jockey wheel a larger surface to press on, allowing it

Another aspect of this is that the trailer and the tow vehicle should be as close to level as possible when packed. If the nose is too low, the break over angle is adversely affected, and when it is too high, the departure angle is affected. Tow vehicles with soft rear springs may be more affected by the tow ball mass of the trailer/caravan than heavily sprung vehicles.

When packing the trailer/caravan, as with packing the tow vehicle, pack the heaviest items lowest. While you can’t do much about the location of the relatively heavy tents atop trailers, all other heavy things like water tanks, diesel tanks, batteries and spare wheels should be stowed lowest in the trailer to offset the weight of the tents somewhat. Tanks should preferably be located across or over the axle of the trailer/caravan to ensure their forward/backward weight distribution is equal. This location also presents a minimum change in trailer/ caravan balance as the water or fuel is used.

TIP: If your trailer/caravan is fitted with a left and right water tank, try to use water from both tanks equally to keep the load in balance.

In my experience, excessive towing speed is one of the main reasons for accidents involving trailers/caravans. Irrespective of the size and type of trailer/caravan you are towing or whether on or offroad, keep the speed down. Towing impacts cornering, overtaking, braking and even straight-line stability. So, be prepared to take it slower on the tar, but even more on rough terrain. Especially when driving over serious obstacles, don’t forget that the trailer/caravan also have to negotiate the same obstacles as the vehicle, but the route of the tow vehicle is not level, adding more pitch and yaw to the front of the trailer.

• Learn to reverse with the trailer/caravan attached, using only side mirrors

• Take extra care on loose surfaces such as mud and sand, and especially wet surfaces

• Keep the speed down, both off and on-road

• Never overload the trailer/caravan and balance the load carefully, front to back and left to right

• Remember that water and spare fuel is consumed during the trip, changing the balance of the load