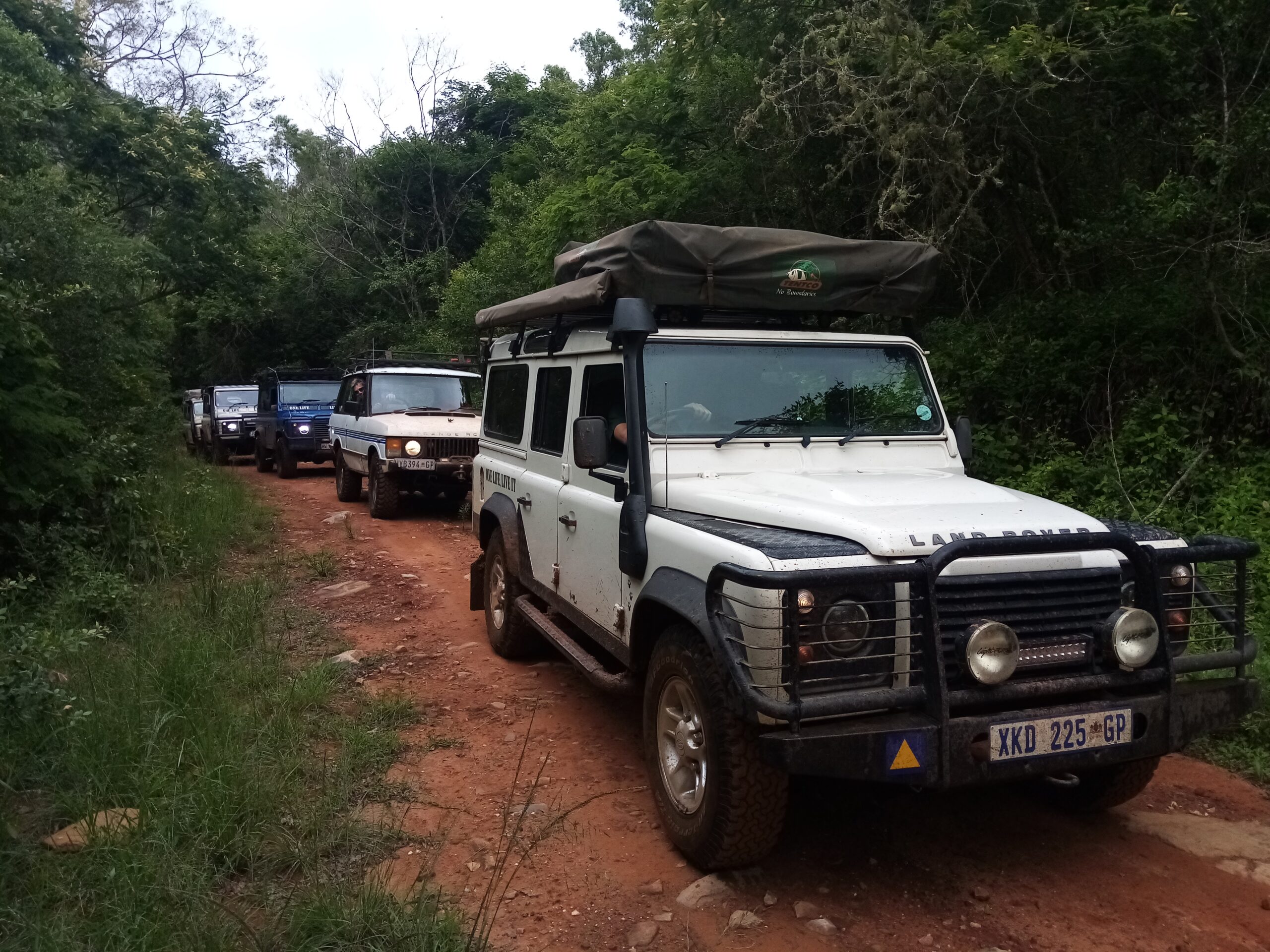 Mesmerising Lush. Green. Dams. Fountains. Waterfalls. Mud. Mist. No, I did not swallow a dictionary. There is simply no better way to describe the recent Wolkberg Bush Run which saw a total of 20 Land Rovers descend on the Magoebaskloof area for a weekend of fun. Laden with camping equipment, this group of 4×4 enthusiasts had travelled from Gauteng, Mpumalanga and Limpopo to join the adventure.

Situated in the Haenertsburg area, in an area known as “The Land of Silver Mist”, you will find the Mountain Fly Fishing Farm, on a working avocado farm owned by David and Josie Pirie. This tranquil place offers five beautifully appointed self-catering cottages and a peaceful campsite – all located near dams where catch-and-release trout angling is one of the popular activities on offer. The campsite has three well-appointed abultion blocks with electricity and hot showers. In addition, the Monte Christo Function Venue on the property can host up to 140 guests.

Arriving on the Thursday, the 46 excited adventurers (some old friends, some new acquaintances only “known” from our Land Rover WhatsApp group) started setting up camp. Our goal in this area of waterrich gorges was to explore and discover the special hidden places we had heard about. As it goes when like-minded adventurers come together, I knew that special friendships would be made over this weekend. We had a short meeting where name tags and goodie bags were handed out, rules and regulations were discussed, and then the bantering and laughter started.

As the sun was about to set and fires were being lit, we were blessed with a rain shower, but it did nothing to dampen our energy and enthusiasm. As one of the group said: “Who knew that Limpopo rain could give a braai such an unforgettable flavour!”

Our first day trip started with much excitement and anticipation. All the participants were raring to go, with grins as wide as the views that awaited us. We kicked off our route by going through Houtbosdorp and then turned south to visit the Ebenezer Dam, which was built in 1959 on the Groot Letaba River.

Next we drove northwards to the Debengeni Falls, close to the Magoebaskloof Dam. This is one of the jewels in the verdant crown of the Magoebaskloof region, which forms part of the extreme northern edge of the Drakensberg mountain range. This waterfall is an idyllic example of the untouched, unspoiled appeal of the Limpopo Province. Here, the Ramadipha River tumbles 80 metres into a massive pool at its base. This was where we decided to take a picnic break, revelling in the natural beauty of the area. Heading further south in the Magoebaskloof, we got to marvel at a grove of the world’s tallest planted trees. These giant examples of saligna gum (Eucalyptus saligna) were planted in 1906 by forestry pioneer AK Eastwood. Initially the tree height bragging rights were held by three known as the Magoebaskloof Triplets. Arborist Leon Visser, who served on the Champion Tree Evaluation Panel of the Department of Environment, Forestry and Fisheries, tells us that it was no easy matter to determine the winner, due to their extreme height and close proximity. To settle the matter, it was decided to measure one close by, known as the Fourth Kin to link it to the triplets. This one came in at an Africa record-breaking 83.7 metres. Interestingly, the closest competitors are an 81.5m-tall mahogany (Entandrophragma excelsum) of found in a remote valley in Tanzania and a mountain ash (Eucalyptus regnans) of 82.25m in the Orokonui Eco Sanctuary in New Zealand. Suitably awed, and with some neck strain from gazing skywards, we hopped back into the Land Rovers which had taken us with great ease through many obstacles and long stretches of muddy track to reach this remarkable destination. What a first day it had been.

The second day’s route led us to the picturesque 22 000ha Wolkberg Wilderness Area, some 14km south-east of Haenertsburg, and all in the shadow of the Wolkberg, a subrange of the Drakensburg. Here we discovered a paradise of mountains covered in soft mist and crystal-clear pools fed by many waterfalls. What a treat it was to relax at the picnic spots we found, right next to rushing water and surrounded by diverse natural bush.

The landscape in this reserve is incredibly varied, and our trusty Landies were quite up to the task of exploring all the access points to cliffs and dramatic gorges, thickly forested ravines and wide-open grasslands. As we trundled along we spotted smaller antelope such as duiker, bushbuck and klipspringer, as well as monkeys and baboons. However, it was the birders in the group who were absolutely thrilled as the Wolkberg is well known as the home to the rare bat hawk, as well as the black eagle, crowned eagle, hamerkop, pearl-breasted swallows and many more. Tree lovers marvelled at the beautiful Yellowwoods, Wild Figs and Waterberry trees. Simply incredible!

On the last evening we were treated to a special farewell meal and prize-giving ceremony at the Monte Christo Function Venue. Our meal was skilfully prepared by the staff of The Red Plate Restaurant in Haenertsburg. We chatted late into the evening, reminiscing not only about the splendour nature had delivered on our Wolkberg Bush Run, but also remarking on the splendid performance of each of the Land Rovers on the trip. As one of the stickers on a fellow Landy owner’s vehicle declares: “One life. Live it.” We certainly did!

A group of Land Rover enthusiasts regularly undertakes Bush Runs, exploring all the beauty this country of ours has on offer. These are some of the highlights on the group’s 2022 calendar: