What’s in the name? 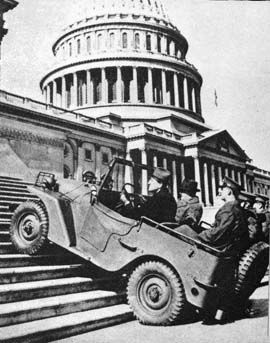 The recent local introduction of two models – the Gladiator and the new Grand Cherokee – has put the Jeep brand squarely back in the spotlight. Not that it hasn’t continued to have a loyal local following over the years. In fact, Jeep enjoys cult status among its many die-hard fans around the globe.

Just like Cutex has become a generic term for nail varnish, Hoover is the colloquial name for vacuum cleaners, a pool cleaner is referred to as a Kreepy and a cigarette lighter is called a Bic, Jeep is associated with off-roading, overlanding and all things adventure. The origin of the name is a topic of contention though. The brand itself has done little to clarify matters and has never actually released an official explanation behind the name.

Fans of Popeye comics should recognise the Jeep name. The character, Eugene-the-Jeep, made his first appearance in 1936. He had some amazing abilities and became a much-loved participant in the trials and tribulations of everybody’s favourite spinach-chomping sailor. Thus, the term “jeep” was adopted to describe something extraordinary. Nobody knows how E.C. Segar, the creator of Popeye, came upon the name, though.

The word “jeep” existed in military parlance since WWI. It was commonly used to describe newly enlisted soldiers and untested vehicles during the build-up of forces prior to the war. The name stuck and was eventually the accepted term for any light military recon vehicle.

One of the most popular explanations is that the name was derived from a slurring of “GP” which, contrary to popular belief, did not refer to General Purpose. The “G” signified a Ford government contract vehicle and the “P” referred to its 80-inch wheelbase. This vehicle was the first “jeep” and came into use in large numbers in 1941. Interestingly, the “General Purpose” name wasn’t official army nomenclature.

But how did the name get to Joe Public? Well, in a 1941 publicity stunt, Irving “Red” Hausmann – an engineer for Willys-Overland – drove a Willys Quad up the steps of the US Capitol a publicity stunt. The promotional gimmick was the brainchild of Willys-Overland. They used the test Hausman to drive their Jeep up the steps of the U.S. Capitol with dignitaries, including Katherine Hillyer of the Washington Daily News, as passengers. The stunt worked beyond all expectations.

Hausmann, who had overheard soldiers call the Willys vehicle a “jeep,” was asked by Hillyer, “What is this?” He replied, “It’s a Jeep.” Her syndicated article appeared on Feb. 20, 1941, with a photo of the vehicle going up the steps of the U.S. Capitol. She used the word “Jeep” as a term to describe the vehicle in the photo’s caption. It is believed that public awareness of the word “jeep” originated from her article and has been used worldwide ever since. Albeit, another source of public interest was an article in the January 1942 issue of Reader’s Digest entitled “Meet the Jeep,” with the author referring to the odd-looking car as a “midget combat car.”

One theory suggests that jeep is an abbreviation for “Just Enough Essential Parts”. This is probably not true, but it is a good reflection of the brand’s no-nonsense, purposeful approach to vehicle making.

In 1943 Willys-Overland applied for the “Jeep” trademark. However, because of conflict over the origins of the name and to what vehicle first bore the name, the trademark was only granted in 1950. Although “jeep” thus became “Jeep” both names still appear in the dictionary. The lower-case version has become a generic term for any compact 4×4, while historians often use it in reference to WWII vehicles built by Willys, Bantam, and Ford. The upper-case version is trademarked and is commonly used for vehicles from 1945 onward.

Most of these theories have a common military thread. So the next time you see a Jeep Wrangler, Cherokee or Grand Cherokee, a Patriot or Gladiator, cruising down the road, remember the namesake came from a lifesaver in WWII. During the war, the only GPS was old, outdated maps. Air-conditioning was provided by an open-air body frame. The radio didn’t play country and western or hip-hop; it was used to coordinate war activity. It drove like a truck because it was a truck. The seats were made of metal, not leather or vinyl or fabric, and rough on the butt. And you shifted gears; the gears didn’t shift for you. But no matter which one you choose to believe, the famous Jeep tagline – Go anywhere. Do anything. – continues to ring true.