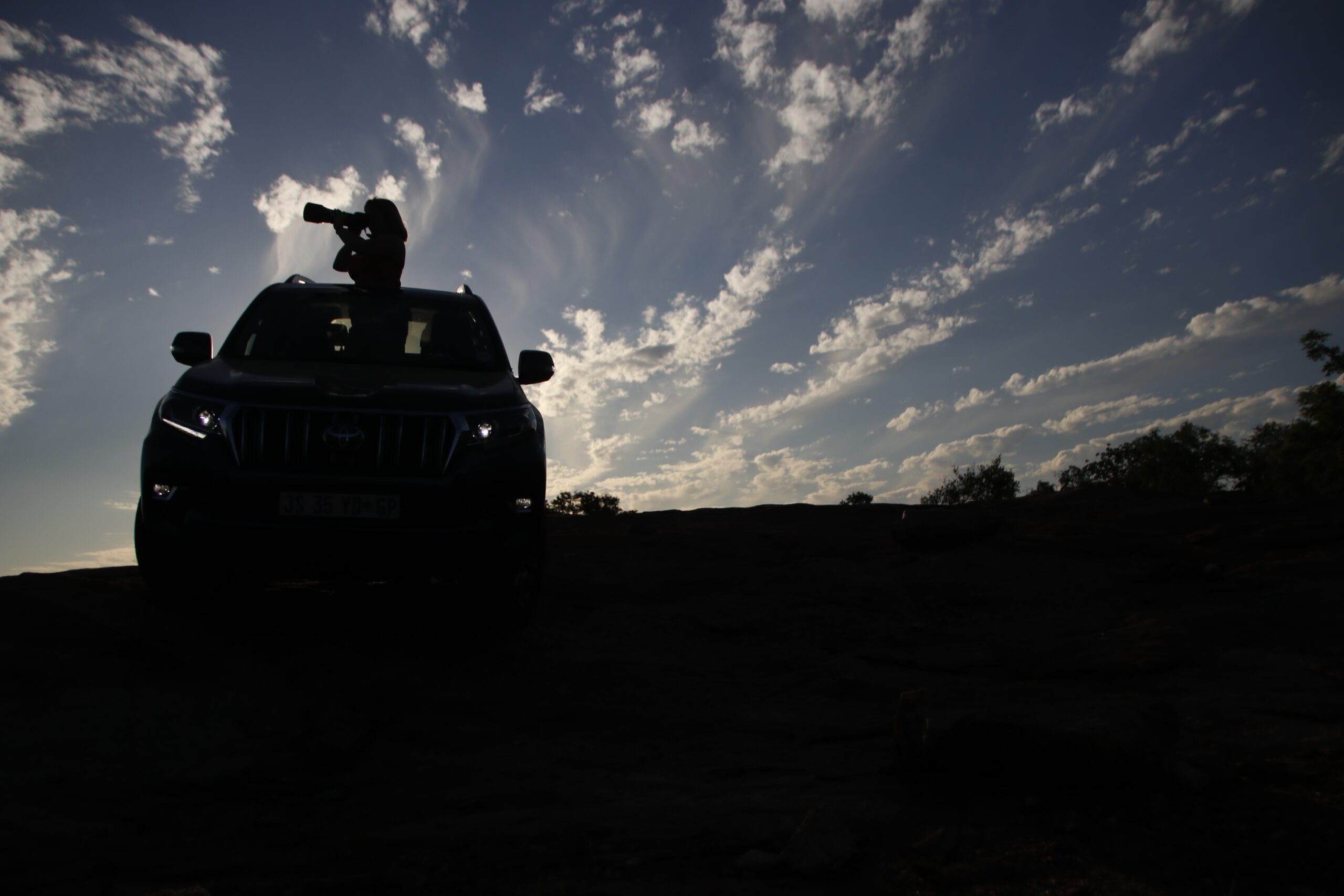 Dubbed by the automaker as the Prince of Africa, the Toyota Prado comes from a lineage of superb off-road capability, 4×4 prowess and the legendary Land Cruiser DNA. Much like Disney’s princes, the updated 2021 Land Cruiser Prado will undoubtedly make many a petrol-head weak in the knees. It certainly got Mary Willemse’s heart racing a little bit faster!

If, as a little girl, you told me that cars would be equipped with driver aids that essentially give it self-driving abilities I would have thought you had watched one too many instalments of the Back to the Future franchise. Similarly, if you had told the little girl holidaying in some caravan park in Bapsfontein, thinking this was as good as it gets, that there were places like Abelana Game Reserve – where your every need is pre-empted and served – I would have thought you were smoking your socks! But here we are, driving cars that we sometimes feel obsolete into places we thought only existed in the movies. Prado’s marketing pay-off line promises to turn your dreams into destinations and, bar the poor road conditions on the N1 (when will the stretch of road just outside Polokwane ever be completed?), our trip was indeed a dream. Travelling from Polokwane to Tzaneen using one of the great classic passes of the Limpopo province, Magoebaskloof, the Prado’s road handling was most definitely put to the test. As I had some work to finish, I opted to take the back seat as a passenger and found the swaying movement in the back quite prominent (due to the size of the cabin or simply because I am no longer used to being a back-seat passenger – who knows?).

Thoroughly earning my title as backseat driver, though, I chirped driver Anton Willemse continuously for what I thought was reckless driving, much to his frustration as he was thoroughly enjoying the drive. On the way back home after the weekend (this time in the hot seat), I understood his confidence better as the Prince was gliding confidently through the winding roads of the Duiwelskloof route we chose for the return trip.

But back to our weekend adventure in the lap of Limpopo luxury at the exquisite Abelana Game Reserve. Arriving at the gate we were met by our somewhat stern-looking guide, Bill Drew, who directed us to the parking in order to be driven to the Abelana River Lodge with the reserve’s Land Cruiser (game viewer derivative). While Abelana is not a self-drive destination, we had arranged beforehand to test the Prado on the reserve’s routes during the course of the weekend. We soon learnt, however, that looks can be deceiving and the “stern” guide turned out to be quite the opposite. He entertained and impressed us with his incredible knowledge of the flora in the area as well as its history, truly encompassing the reserve’s promise of sharing experiences and memories. As a family, we were good and proper jealous listening to him recounting lockdown tales about getting close to the local lion pride (follow him on Instagram to take this journey with him through some incredibly photography: @billdrewmpisi).

This continent clearly did not only make it onto his calf tattoo but deep into this Irishman’s heart as he vows to stay. Owned by the Mashishimale community, Abelana derives its name from the Northern Sotho word meaning “to share among each other”. This spirit of sharing underpins the relationship between the Mashishimale and the lodge operations partner who leases the land for eco-tourism purposes. “As caretakers of this reserve, and working in partnership with the Mashishimale community, it is important that we nurture a culture of sharing the benefits of what we are doing here,” explained CEO of Abelana Game Reserve, Ian Beauchamp. He added that since opening, the reserve has The revolutionary new engine has received a raft of upgrades, resulting in the Prado confirming its title as Prince of Africa. Prado Road Test employed 52 people from the local community. “Most of these team members came into their jobs with no previous experience and are undergoing training and skills development that will provide them with invaluable skills needed for careers in the tourism and hospitality sector.” Further underpinning this community partnership based in ecotourism, the reserve outsources its laundry and staff transport to local community-based companies. At the same time, all waste is removed from the reserve and recycled by a local community recycling business.

Abelana bottles its own water, reducing the reliance on single-use plastics, and is in the process of developing community vegetable farms that will ultimately supply the lodge with fresh produce. Much like the success of this community partnership, the updated Toyota Prado simply works. It will most likely be the last in this generation (the fourth) and is jam-packed with features and safety specs. The Land Cruiser Prado VX-L that we drove comes with everything and the kitchen sink, ticking all the boxes, from comfort to capability. With adaptive cruise control to blind-spot monitoring as well as lane-keep assist, there is not much more drivers can ask for from a safety perspective. From a connectivity point of view, the new Infotainment system with its 9” display audio touchscreen can be directly linked to any smart device via either Apple CarPlay or Android Auto. It is clear that special attention to detail and luxury was paid to the decor of the Abelana River Lodge. Working in partnership with the Mashishimale community, it’s important that we nurture a culture of sharing.

Its new engine (first debuted in the recently updated Hilux) has received a raft of upgrades including a new ball-bearing turbocharger with a larger turbine and impeller, and improved engine rigidity and cooling. Better fuel economy is realised through optimised pistons and piston rings, changes to the cylinder block and head, higher fuel-injection flow rate and the adoption of high-performance materials for the exhaust manifold. This all adds up to an impressive 150kW and 500Nm of peak torque. Additionally, a newly balanced shaft helps smooth out engine vibrations, improving NVH performance and contributing to an even higher degree of refinement. Toyota claims fuel consumption at 7.9 litres/100km. During our trip, which included some off-road driving, we managed an average of 9 litres/100km. Fuel capacity is 150 litres with an 87-litre main tank and 63-litre sub-tank. Maximum braked towing capacity increased to 3 000 kg on 2.8 diesel models, and CO2 emissions are down to 209g/km.

Having sampled the new 2.8 machine in the Hilux a week or so earlier, we were keen to see what it is capable of in the larger body of the Prado. And what a pleasure it was – we could immediately feel the pronounced difference brought about by the new engine, now mated exclusively to a six-speed automatic gearbox. Never missing a beat and offering ample power supply while confidently finding the correct gear, even on passes and when overtaking, I can see myself using this vehicle in my daily commute or taking it into the far reaches of Africa.

I particularly enjoyed the Multi-Terrain Select System which allows a myriad of options, including Rock and Dirt, Rock, Mogul, Loose Rock, as well as Mud and Sand modes. While we could not try out each option during our time at Abelana, the rock-climbing ability was proven with success. It simply goes where you point it, without any objection. Sometimes viewed as the lazy off-roader’s gimmick, I found the panoramic view monitor particularly useful as it gives you a full scope of your surroundings. Using all four cameras allows excellent vantage points when you need to see what is in front or to your side. Finally, the crawl control function – although it sounds like gremlins are trying to break your drive-train – and the ability to raise your suspension make this a more-than-competent off-road companion. If you are planning to take it overland, I would suggest a decent set of All-Terrain tyres, as the factory fitted tyres are a bit soft. Having said this, be prepared to lose on the fuel economy side with AT’s.

Abelana Game Reserve is a brand new 15 000ha reserve adjacent to the Greater Kruger National Park (nearest entry gate through Phalaborwa) and the Selati Game Reserve. While this reserve has been an operational cattle farm (remnants of water troughs is scattered among the lush bushveld) and then a hunting farm, it now focuses on eco-tourism in partnership with the Mashishimale community. Currently the reserve offers two accommodation options, with many plans to expand.