The Luangwa trifecta – always a winner! 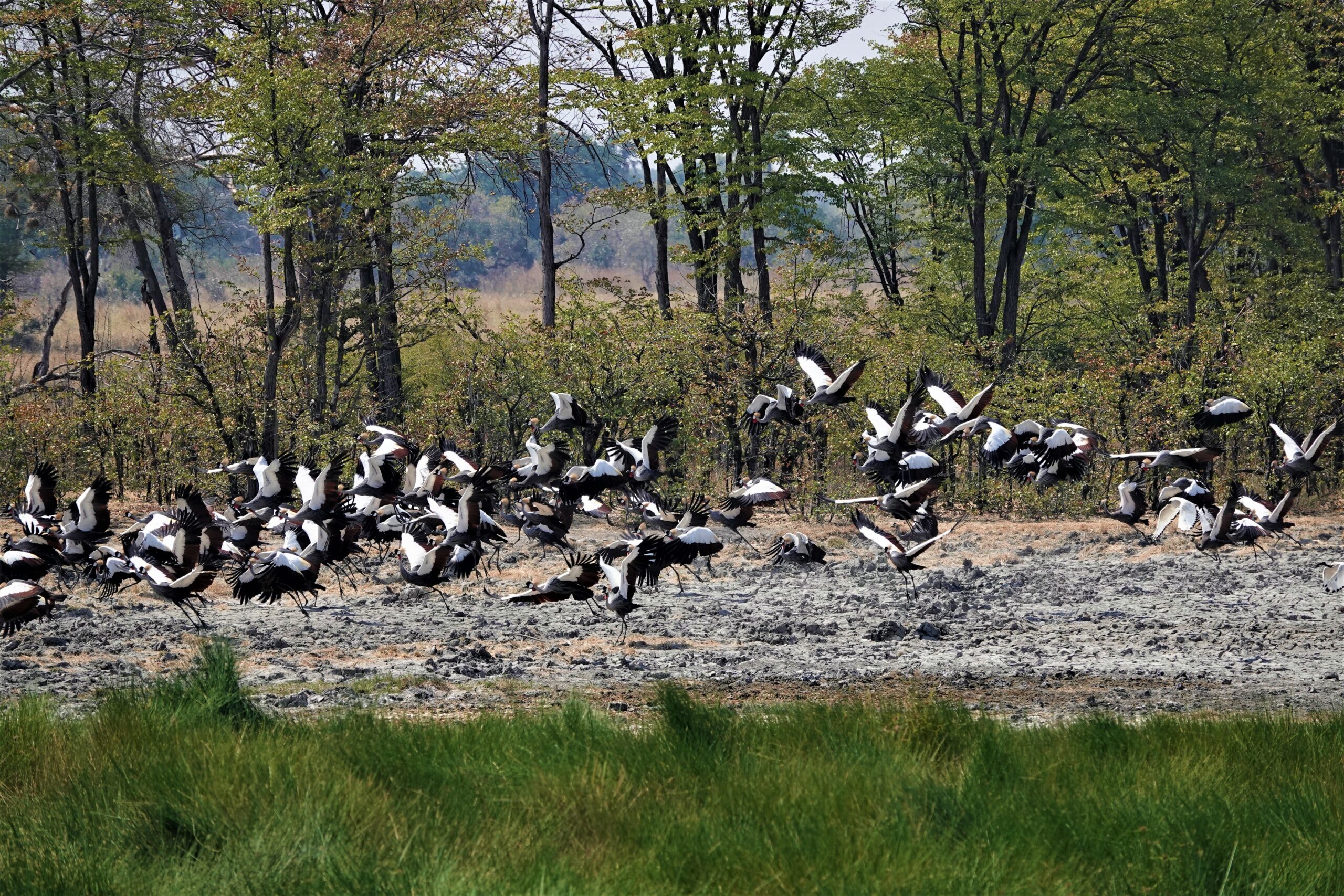 If Zambia has a safari destination par excellence, it has to be the Luangwa Valley in the southern end of the Great Rift Valley. The three national parks situated here – South Luangwa, North Luangwa and Luambe – are a magnet for game when the river dries up between June and October, bringing animals into a network of oxbow lakes to feed and drink. André van Vuuren recently lead a tour to this magical destination.

Zambia is one of my favourite southern African destinations, and I was excited to take a group of eight like-minded travel companions to this true wildlife destination. The first evening of our planned expedition was spent at the upmarket Bongela Private Game Reserve around 10km from Vaalwater in Limpopo, where the group got to know each other better, and could share their high expectations for an unforgettable trip.

After a game drive through this bushveld reserve, we enjoyed the small pleasures that come with the luxury chalets, before tucking into a scrumptious Eland potjie for dinner. Eager to get our adventure going, we hit the road to Martin’s Drift border post, aiming to get there early and into Botswana before the crowds that are typical at African border crossings. After all the required Covid-19 protocols were observed, we pushed through to Elephant Sands, situated 70km north of Nata, where we spent the night in the campsite overlooking the famous watering hole.

There is no permanent water in the area and owner Ben Moller transports water from many kilometres away in a Scania-sponsored water bowser. This was a great start to a promising adventure as we enjoyed watching the ellies drinking mere metres from our campsite. This popular camp boasts good ablution facilities, as well as a restaurant and a sparkling pool, making it an ideal stopover en-route to Kasane in the far north.

As with Zambia, Botswana is close to my heart, in particular the Chobe region where we were planning on spending two nights before heading onwards. We left for Kasane the next morning and stopped for coffee at Touch of Africa, a charming little lodge just outside Pandamatenga. Here we could clearly see the devastating effect on tourism caused by the regulations around the Covid-19 pandemic. Areas are deserted and many facilities closed up, with clear evidence that communities linked to tourism are struggling. However, as ever, the people of Botswana remain friendly and helpful.

The campsite at Chobe Safari Lodge was our home for the following two days. It is a beautiful space, with private ablutions and a thatched pub overlooking the Chobe River. Our itinerary allowed time for a self-drive game drive into the Chobe National Park, famous for the highest concentration of elephants found anywhere in Africa, plus a three-hour sunset cruise on the Chobe River. The park is also known for its huge herds of buffalo, rich bird life and exquisite sunsets – best enjoyed on one of the not-to-be-missed late afternoon cruises.

Since our Covid-19 PCR tests had now gone over the 72-hour limit, we had to be re-tested before we could enter Zambia. Fortunately there are various mobile clinics dotted around where one can get this done. We did ours at the weighbridge in Kazungula, then went back the following morning to get the results, only to hear that one of the ladies in the group had tested positive. That was a huge disappointment for our entire group as she and her husband had to stay behind. However, since she was not suffering any symptoms, she did a rapid test that came back negative, and a
second PCR test which also came back negative – so they could rejoin the group a day later in Lusaka.

Our group crossed the Zambezi River using the spectacular new suspension bridge, an upgrade on the ferry which was the only way to cross into Zambia before. Although there is a brand-new and modern border post, it remains a time-consuming process to get into Zambia. Best to take it in your stride, be patient, and make sure you have police clearance for your vehicle! After finally getting sorted (the local Interpol took their time inspecting our convoy’s vehicles), we left via Livingstone for The Moorings Campsite. This well-established campsite, situated between Mazabuka and Monze in Zambia’s Southern Province, is located on the Moorings Farm which has been in continuous operation since 1920.

The next morning we drove into Lusaka where we stopped to change our Rands into Zambian Kwacha at a Bureau de Change, and to buy provisions at the well-stocked Pick ’n Pay. Driving through Lusaka at peak hour is not for sissies, but we had no other way to get to Pioneer Camp on the eastern side of the city. From Lusaka, we drove on the Great
East Road to Chipata. This was a long day behind the wheel, covering 550km, but we reached the Mama Rula’s Campsite just in time to watch the Springbok rugby game. Excitement filled the air as we would be entering the Luangwa Valley the next morning.

We had only 120km to drive to South Luangwa National Park, where we would spend the next three nights. Established in 1972, this is arguably Zambia’s most famous and most visited park. Covering an area of 9 050km², it is the second-largest of the 20 national parks in Zambia. On our way we planned to stop in at Tribal Textiles, an interesting textile factory just outside of Mfuwe, but discovered the factory had moved and there was only a small showroom in town.

We pitched camp at Wildlife Camp on the banks of the Luangwa River. This camp was established in 1992 by owner-manager Herman Miles, and is sited on the Wildlife and Environmental Conservation Society of Zambia’s prime 400ha riverfront property bordering the South Luangwa National Park. A wealth of must-see animals roam freely in the unspoilt bush around here, with a chance to spot Thornicroft’s giraffe, Crawshay’s zebra and Cookson’s wildebeest – all of them unique to the Luangwa Valley.

Set in a pristine wilderness area, South Luangwa National Park is considered as one of the last great wildlife wonders of the world. Here one can expect a safari experience unmatched by any other destination, and we were not disappointed. The park is open year-round and offers game drives in open game-viewing vehicles, incredible walking safaris and night game drives. We had elephants in our camp throughout our stay, and were lucky to have three different leopard sightings within the first half-hour of our night drive.

After a memorable three nights, we bid the friendly staff of Wildlife Camp farewell and headed to Chichele Hot Springs via the Nsefu Sector of the park. Here, steaming hot groundwater flows from a pipe out of the ground. The water is exquisitely fresh and sulphur-free, so everybody made use of the opportunity to fill their hot water flasks. Once the water has left the pipe and cooled off, it is a source of water for the puku (a medium-sized antelope found in the region) and Crowned cranes which inhabit the surrounding plains.

Our next stretch of driving took us to Luambe, which at just 254km² is one of Zambia’s smallest national parks, and also its oldest, having been declared a conservation area in 1938. It is situated on the eastern bank of the Luangwa
River in the heart of the Luangwa Valley between the North and South Luangwa national parks. Due to time constraints we headed through the park and pitched camp in the Kamkonzo Community Campsite, which is managed by the super helpful and pleasant duo of Mike and Simon. This campsite is a real treat and well worth a longer visit.

The next morning, we crossed the Luangwa River into North Luangwa National Park, using the Mwanya Pontoon as the water level was still too high to drive through. The pontoon crossing was quite an experience, with much laughter and anxious moments trying to get an off-road caravan across. However, with our group of able-bodied and willing men
helping the pontoon manager, the crossing was finalised in just under two hours.

We spent the following two nights in the North Luangwa River Lodge. Previously known as Delia Camp, it was built by Delia Owens who, together with husband Mark, wrote the well-known book Cry of the Kalahari. The duo were given permission to do research in North Luangwa, but ended up spending more time engaged with anti-poaching initiatives, a story told in their book Survivor’s Song.

Our time in North Luangwa was spent on game drives and a walking safari where Emmanuel, our Zambia Wildlife Scout, did his best to find lions. It was a special moment for the group to spot a magnificent young male while on foot, coupled with some nervous moments. With the excitement over, we headed for a lovely lunch break at an area previously known as the Buffalo Camp, which, sadly, was destroyed by recent floods.

Departing from North Luangwa River Lodge after breakfast, we enjoyed an amazing drive with plenty of elephant sightings as we threaded our way up the Muchinga Escarpment which takes one out of the Luangwa Valley. The road then took us to Kapishya Hot Springs where we spent two days on the banks of the Mansha River, relaxing in the sulphur-free geothermal hot spring pool. This was the turnaround point for our extended safari, and from Kapishya we headed for Forest Inn in the Mkushi area, a big commercial farming district where many of the farmers originally came from South Africa.

From Mkushi we went back to The Moorings before spending two nights at Thorntree House in Livingstone. After another round of Covid-19 tests, we visited Victoria Falls. Every time one sees this spectacle, one is reminded why it is considered one of the world’s natural wonders. The falls are approximately 1 690m wide, and when in spate millions of tons of water drop varied heights, from 62m (at Devil’s Cataract) to 109m (Eastern Cataract). In comparison, the Niagara Falls are 968m wide and on average 54m high.

We crossed the Zambezi using the new bridge into Botswana and headed for Woodlands, 15km north of Francistown, for our last night of this epic safari. Driving home, I thought about a quote by the British author and nature filmmaker Brian Jackman: “Everything in Africa bites, but the safari bug is the worst of all.” I concur, Brian – once bitten, it remains forever in your blood!

Intrepid explorer and avid nature lover André van Vuuren has offered overland excursions and safaris throughout Southern Africa for the past 25 years. He is a highly experienced and qualified safari guide and knows how to take the best that Africa offers and create a memorable experience for his clients. André specialises in guided self-drive safaris to Botswana, Zambia and Malawi. He also offers fly-in safari packages to the Serengeti and Zanzibar.

Some of his calendar highlights for 2022 includes: