The dangerous but docile boomslang 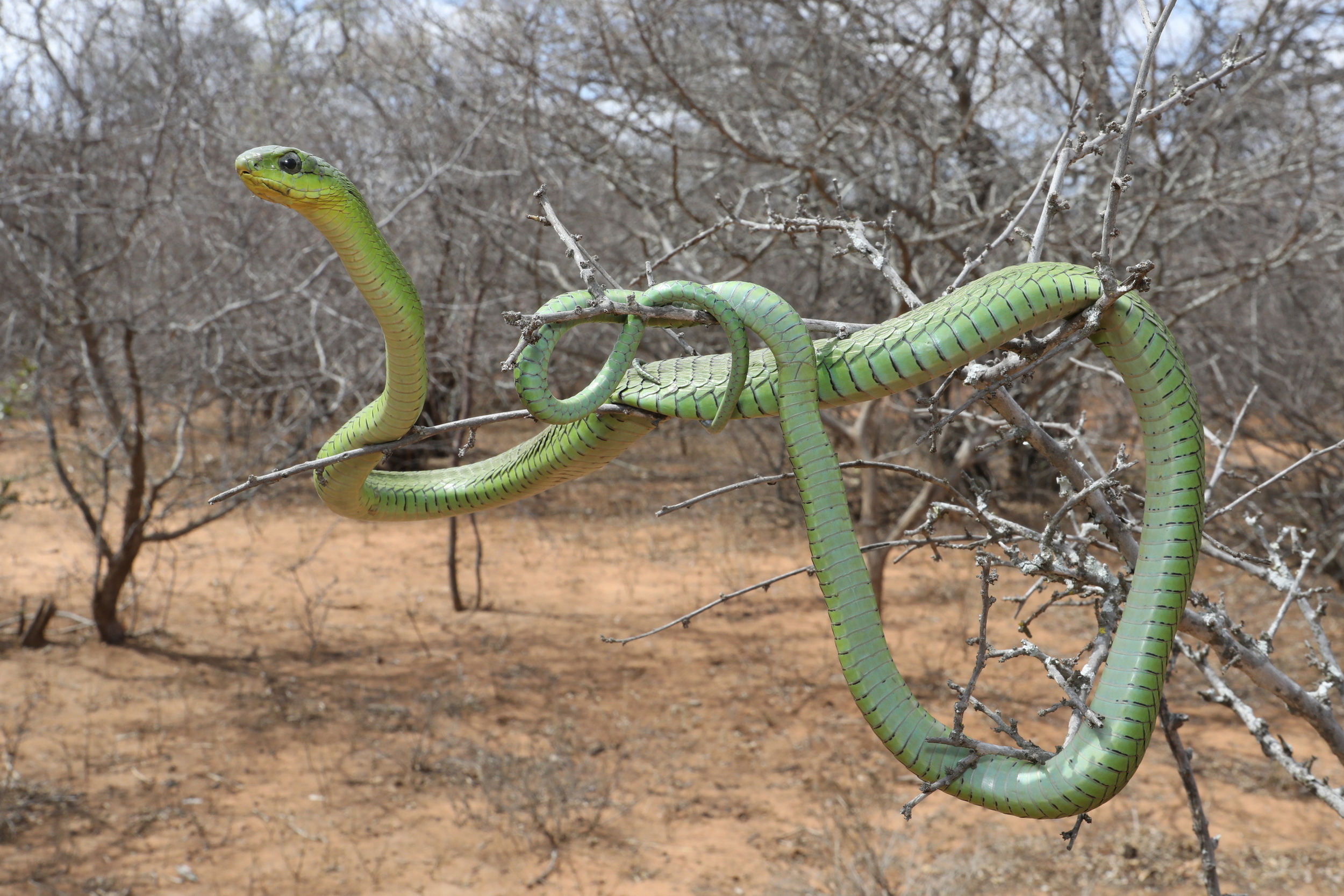 The boomslang is one of the most dangerous green snakes found in nature. However, bites by these snakes are quite rare, says Luke Kemp from the African Snakebite Institute.

Drop for drop, the boomslang (Dispholidus typus)has the most potent venom of any African snake. The amount required to kill a human is so small that one could barely see it with the naked eye. Luckily, they are very shy snakes and avoid humans, which makes bites very rare. The boomslang is largely a bushveld and savanna species that occurs in a widespread habitat from the South Coast and into the fynbos of the Western Cape.

Boomslang are long, thin snakes that average 1.5m in length, though may exceed 2m. Males are usually bright green, sometimes with black between the scales, but in the Cape province they are black above with green or yellow sides. Females are olive-brown to grey. Hatchlings and juveniles are grey with brown mottling and large emerald-green eyes, changing to adult colours when they reach about one metre in length. During spring, females lay eight to 15 eggs in the hollow of a tree or rotting log. The eggs take around four months to hatch and juveniles measure 30 to 40cm.

The boomslang is a docile snake that lives in trees and shrubs, venturing to the ground to hunt, bask in the morning sun, or move to a new tree. They are frequently killed by passing vehicles whilst crossing roads. If approached, they are quick to escape up the nearest tree. They are especially fond of gardens where they feed on hatchling birds, chameleons, and frogs.

Humans are at low risk of being bitten and most bites recorded for these snakes relate to snake handlers. These back-fanged snakes have a haemotoxic venom, which causes the blood cells to burst and prevents blood from clotting. This results in bleeding under the skin, out the nose, in the urine and eventually on the organs and brain. It is a slow-acting venom and symptoms may take four to eight hours to present. Death is usually only seen after one to three days, allowing victims ample time to reach a medical facility. A monovalent anti-venom is effective against the venom of the boomslang and bites are easily treatable.

• DO NOT TRY TO CUT OR SUCKOUT THE VENOM: Snake venom quickly attaches to local tissue and is absorbed into the lymphatic system, and very little venom can be removed by suction. Cutting a snakebite wound may expose the wound to secondary infection.

• DO NOT APPLY ELECTRIC SHOCK THERAPY: This holds no value in the treatment of snakebites as electric shocks do not neutralise snake venom.

• DO NOT APPLY A TOURNIQUET: Arterial or venous tourniquets are not advised in most snakebites as venom is initially transported largely through the lymphatic system and not through veins.

• DO NOT APPLY ICE, BOILING WATER, LOTION ORPOTIONS: Leave the bite site alone, except for cleaning it with cool water and applying a sterile gauze dressing. Boiling water does not denature snake venom. Never give a victim alcohol.

• DO NOT INJECT ANTIVENOM AS A FIRST-AID MEASURE: If required, antivenom must be injected intravenously by a medical doctor in a hospital environment and usually in large quantities. Some patients have an allergic reaction to antivenom that may result in anaphylaxis, a life-threatening condition if not treated promptly.