What is it about the Transkei Wild Coast? Is it the fact that it has not been developed like the rest of SA’s eastern coastline, or is it the limited road infrastructure that turns every destination into an adventure? Is it the friendly faces of the local inhabitants, living in their colourful rondavels dotted all over the rolling green hillls? Truth is, it is probably all of the above!

Once you cross the Great Kei River, it’s like entering a different country, one that reminds of a tropical island. And with it, there’s a “rhythm and vibe” that makes you feel free from the rest of the world.

The perfect place, then, to host the Defender Trophy Transkei 2021, as 31 Defenders (including a new Defender) arrived at Coffee Bay campsite on a while back, ready for three days of technical driving to help unwind and put their 4×4 skills to the test. And what an adventure it played out to be.

Some used the pont across the Great Kei river, others came via Mthatha. And then there were those who relied on their GPS instructions to “guide” them via the “shortest” way across mountains and hills, crossing rivers and streams while traversing some of the worst roads the Transkei could offer. As one group member commented upon his arrival: “Thank goodness I drive a Defender!”

Our first day started with a fun fishing competition at the mouth of the Mthatha River. This was a “catch and release” contest, but most bar one could not release anything as they did not catch anything. Only Manus managed to catch something that resembled a fish, for which he received one point. By some strange irony, that later turned out to be the deciding point between first and second place.

The convoy then made its way across the grassy hills of beautiful rural Transkei, which eventually turned into a rough track and a river crossing en-route to The Hole in the Wall, which is probably the Transkei’s most well-known attraction.

This unique structure is a huge, detached cliff with a giant opening carved through its centre. Known as “izi Khaleni” in Xhosa, during certain seasons the waves crash through the hole so violently that the area describes its name – a “Place of Thunder“. Of course, even the fairly cold water did not deter some of the braver adventure seekers from diving into the tube of water as it exits the hole and races up towards the beach.

After a relaxing afternoon, the convoy headed back to Coffee Bay, where a seafood bonanza provided by the local community awaited them back at camp. What a special treat!

Day two started with Nick and Tiffany providing the wake-up song that later became our theme song during the Trophy Transkei event, the easy-going reggae song “Angels Above Me” by Stick Figure.

Breakfast done, 31 Defenders got going and slowly rumbled their way through the rolling hills and densely jungled river valleys of the magical Transkei. It is hard to describe the beauty in words. But it did move some to compose prose that does it justice. Marzel, one of our participants wrote the following: “Mooiste Transkei, jy sal by my bly. Jou mense jou vriendelikheid die memories maar die eenvoud, geluk is toegevou in ‘n stokkielekker. Kinders wat water aandra, beeste in die pad en boerbokke wat ken van ‘Afrika tyd’ en ‘n ou Landy wat geduldig die pad aandurf.”

Our destination was the pristine 5 450-hectare Dwesa-Cwebe Wildlife Reserve, which adjoins the Marine Sanctuary (19 293 hectares), both of which are managed by the Eastern Cape Parks and Tourism Agency. What an eye-opener this reserve turned out to be. It is beautifully kept, the staff are friendly, and there is a “feel good” atmosphere all around. This is a real feather in the cap for the Transkei, and a worthy showcase for its tourism potential.

Day 3: Many rivers to cross

After a brief spell of rain the previous evening, day three was still overcast when the Trophy goers had to strike camp, and again Nick and Tiffany produced smiles all round with our theme song.

Hugging the coastline as far as possible, the Trophy route plunged into the valley approaching the Nqabara River, with the lunch stop set for the Xhixini River mouth, after quite some hours spent rocking and rolling along the muddy tracks that are a key part of the Transkei’s still-rural appeal. After lunch, we headed further south to the Kob Inn Hotel where the winners were announced later that evening.

Participants agreed that this event was once again chock-full of special moments and memories to treasure for years
to come. “I have been involved as participant and crew for the last 16 years as an avid Defender nut. My trusty 90Tdi has clocked up a total mileage of 720 000 kilometres and has been my favourite ride for many years,” Nick commented. “However, after experiencing the improved space and comfort of the 130 on this trip it will now become
my official Defender Trophy chariot.”

It seems that the last two Defender Trophy events have really hit the spot with the Defender family, in terms of destination and the right balance of fun and technical driving. A nostalgic Team Vlakvark said that they could not wait for the next event which means a new destination, reconnecting with old Trophy acquaintances and making new friends around the campfire with fellow enthusiasts.

The Transkei event also proved yet again that the Defender is a hugely versatile 4×4, with so many options available
regarding kit to transform and personalise each vehicle. As always, it is a sight to behold when you see how 31 out of 31 Defenders were customised to meet the driver’s exact needs. What a special group of vehicles and people, indeed.
Wrapping up the event, organiser Johan Kriek was full of praise for the participants who made it into the family-friendly celebration of the Defender that it has become.

The angels above me they sing that they love me, oh Lord
I’m travelling alone
So far from home and love
Oh no, angels, angels please don’t leave
I’m trying to get to her with the love she deserves, Lord please

I’ve been playing my guitar laying underneath the stars for you
In the light of the moon I’ll be forever singing tunes for you
When the stars are aligned
Like the colours in your eyes, greens and blues
It’s not when or whether, we’ll always be together, it’s true

Defender Trophy Transkei in a nutshell

A big thanks to our sponsors. You make these memorable events possible:

About the Defender Trophy

The Defender Trophy is a family-friendly overland event for Land Rover Defender enthusiasts from all over the country (and sometimes even the world!). According to organiser it is not a competition neither does it test your physical fitness – it is a way of life. “This event is for people with green blood in their veins. People who adore their Landy’s and enjoy exploring the beauty of nature in all its facets,” he explained.

Winners are determined based on navigational skills, knowledge about the local area’s culture and wildlife – and, of course, their knowledge about Land Rover Defender. “Yes, we do award prizes at the end of each event but, as participants often tell me, everyone participating is a winner. It really is about the camaraderie, new friends, evenings around the campfire, laughter and fun.”

The inaugural event took place in 2004 in Lesotho and the series had since grown into numerous events in various areas per year, held at different locations.

*Visit www.defendertrophy.com for information on the 2022 events or find them on social media: @DefenderTrophyAfrica 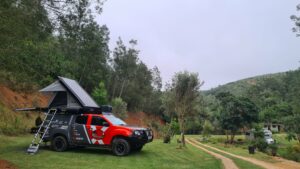